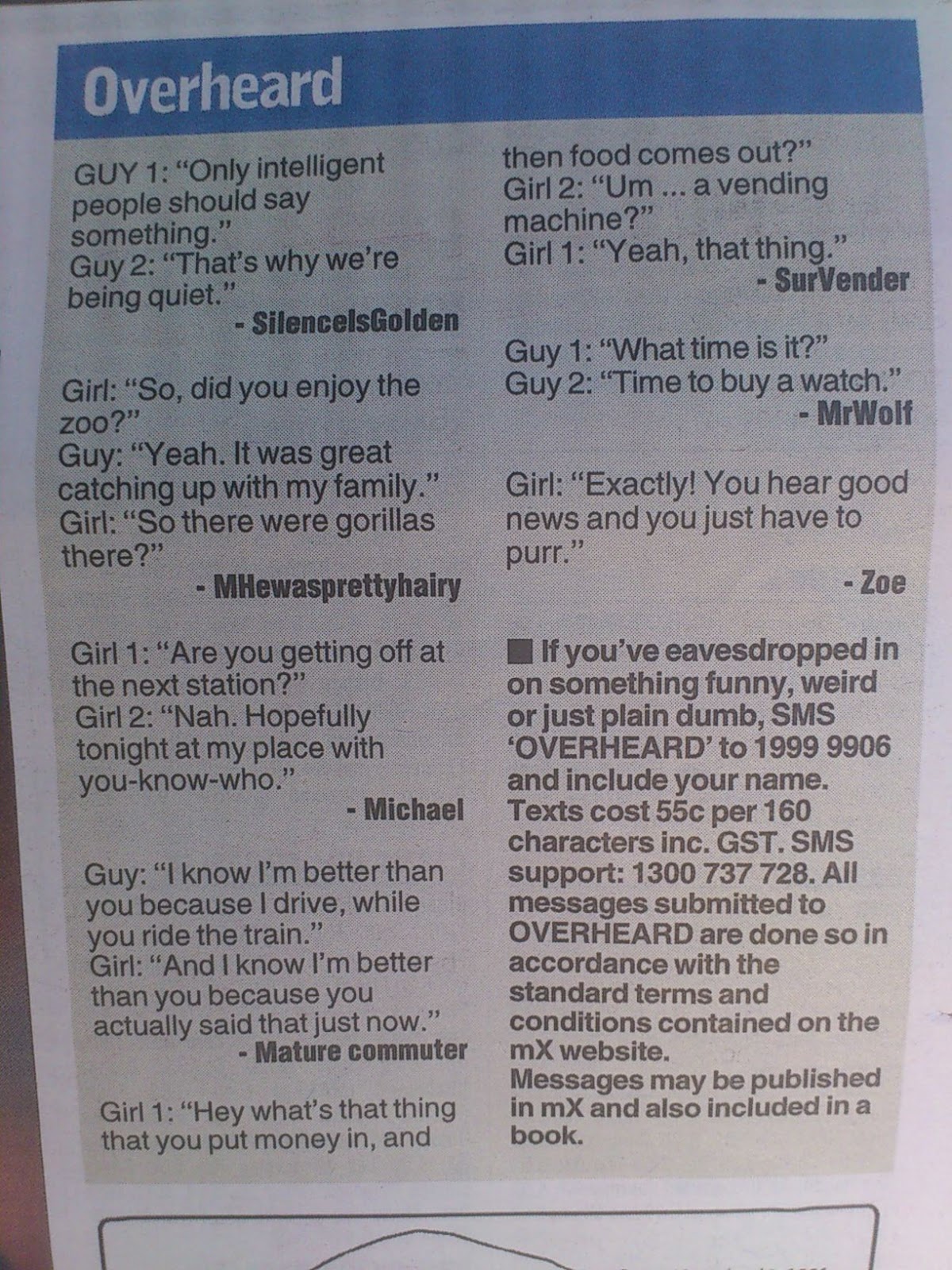 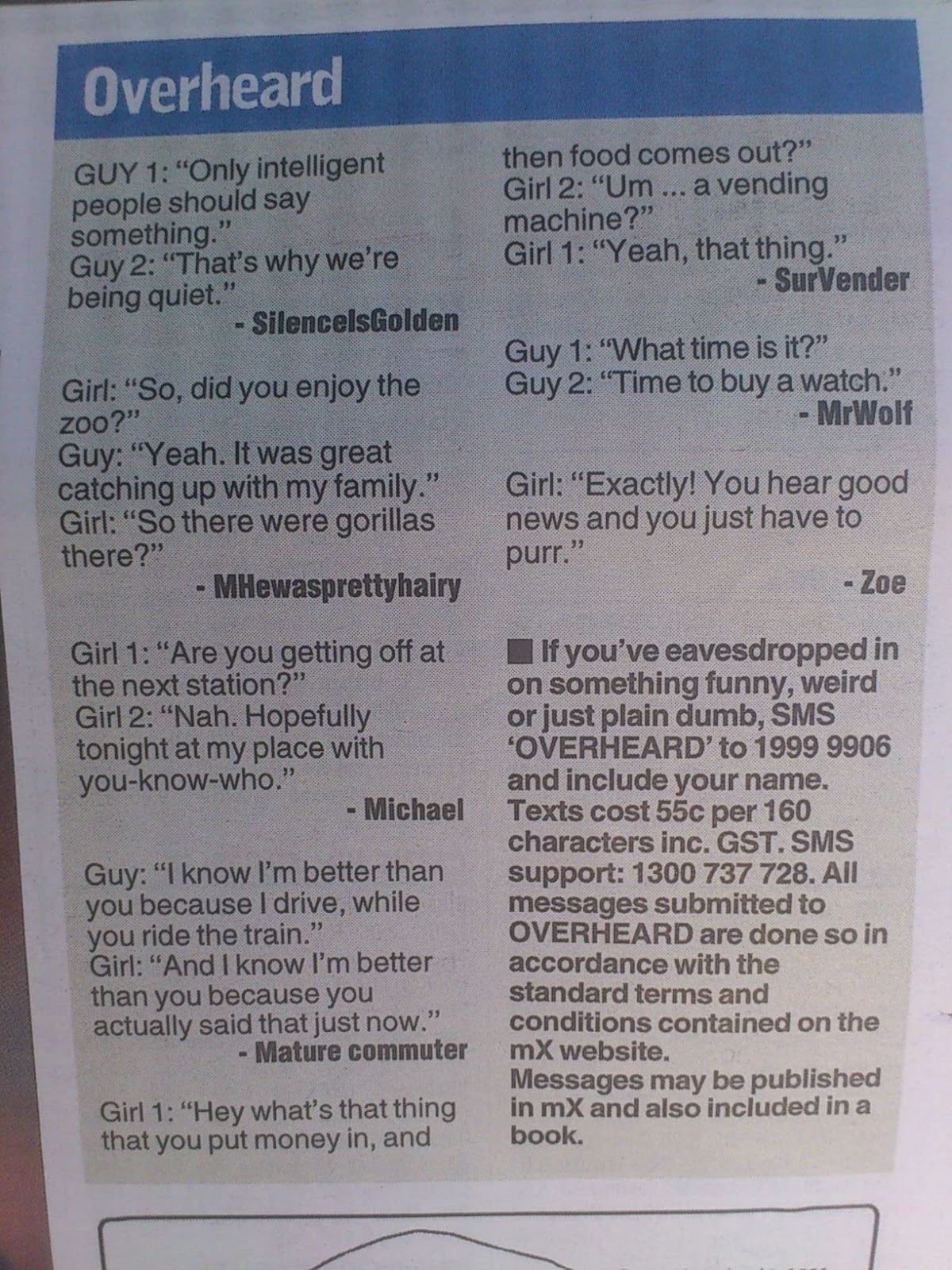 Thought that since its Sunday, back to work for me tomorrow I can cram in some quick laughs.

Heres the latest edition of the MX :) 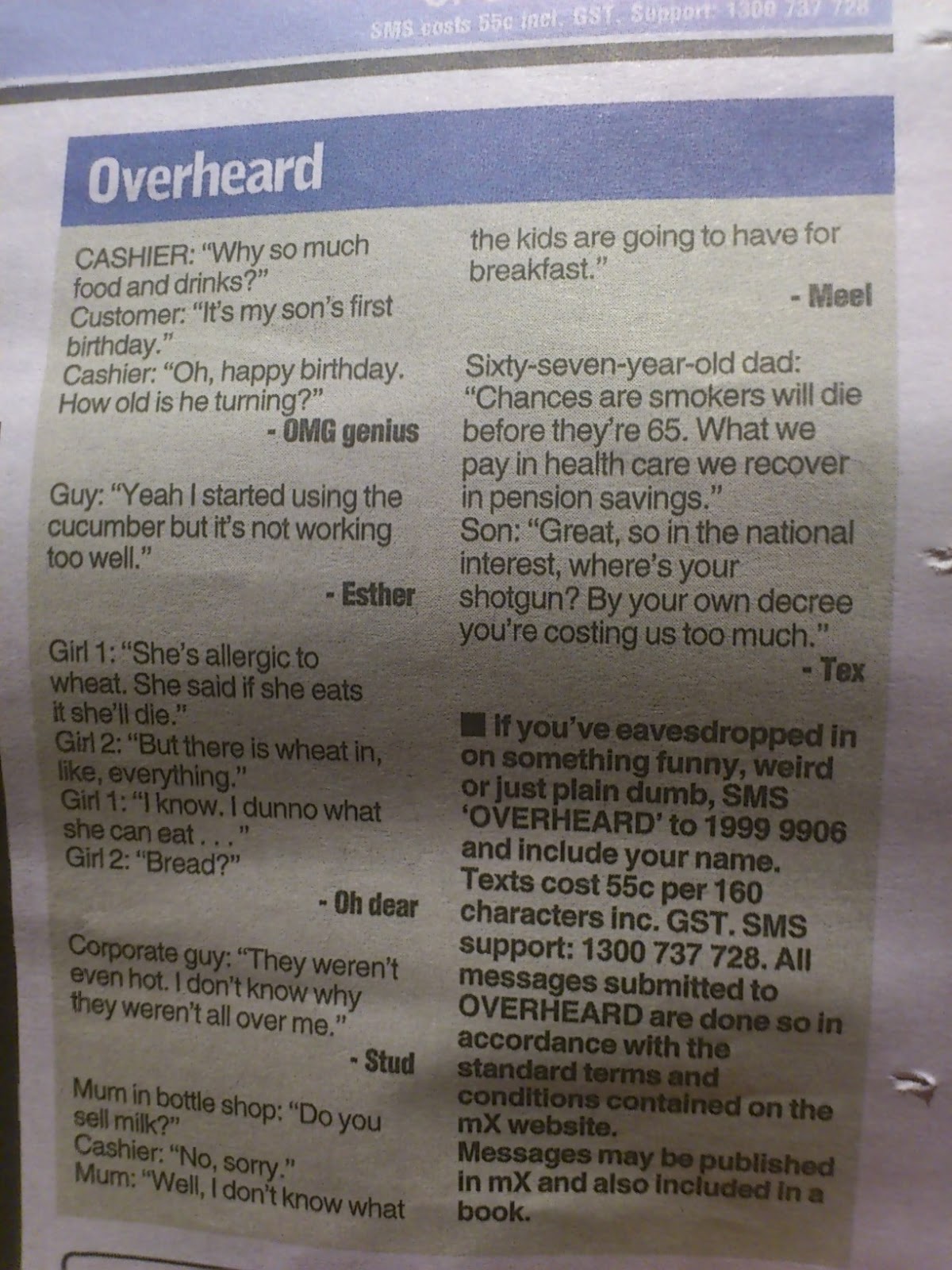 Hope you all have something fun or relaxing planned for the weekend, I'm off to see Swedish House Mafia and then just relaxing :) 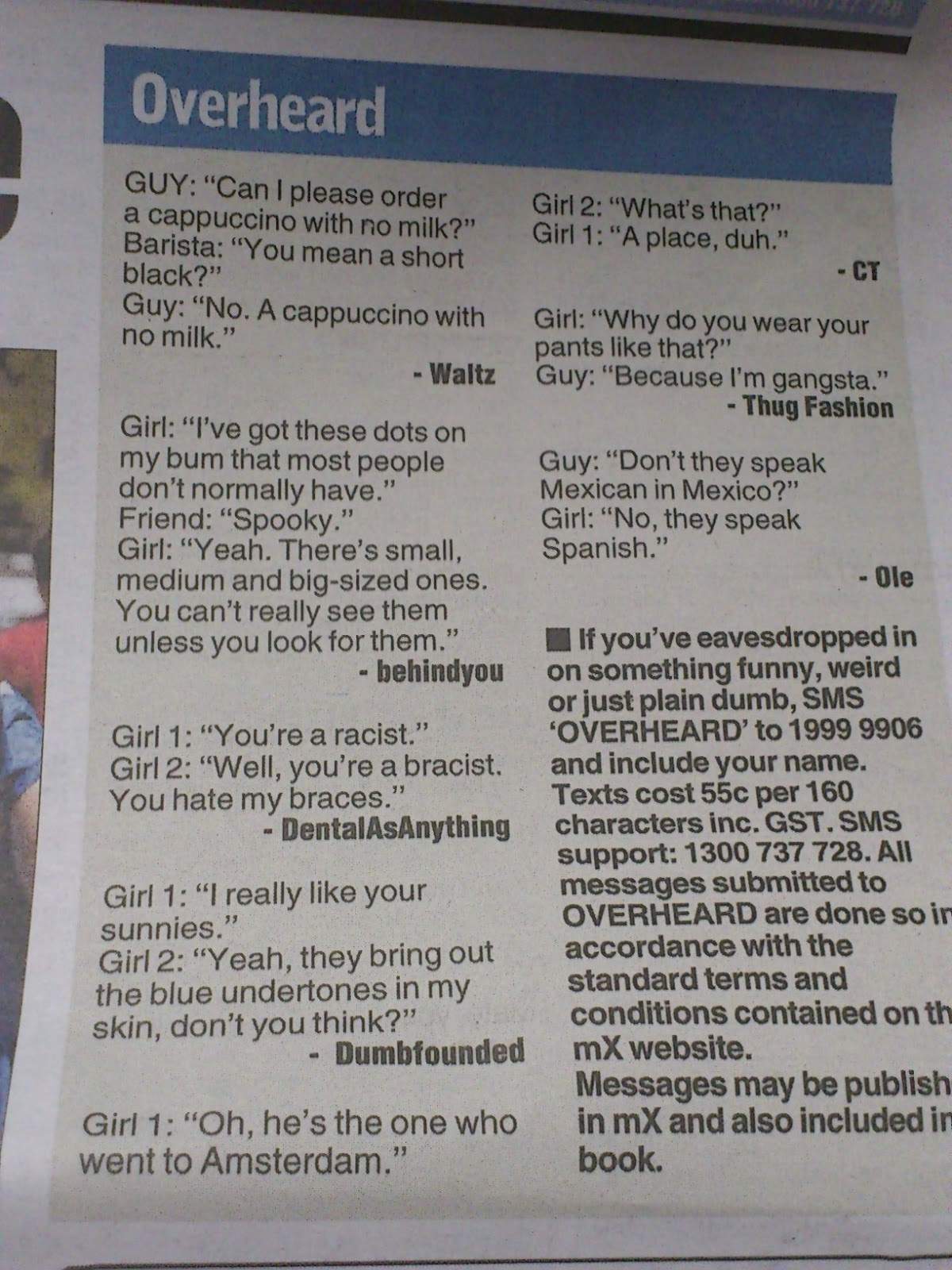 Back to work at least the week has gone by quick for me.

These shameful jokes have provided me with some good laughs, enjoy!

To carry with the tradition of funny puns, I came across this list of people who have either had some really cruel or naive parents who did not know what they were thinking when deciding what to call them. Some of these unfortunate combinations are vile and dirty but thats what makes them funny :)

Its a long weekend in Australia this week which means I get the monday off so yay!!

I've been just watching tv, hanging with some friends and eating really really good food which is what a good break is about for me.

Here is another double edition of MX enjoy and hope everyone is enjoying their weekend as well :)

This is for Monday and Tuesday! Happy Hump Day Everyone :)

Now I am a BIG ebay addict; I confess to going at work which is why I have a pile, sorry make that a big pile of earrings and other assorted things.

But sometimes there are some funky things people put up for sale and I can't believe these items made their way on a listing! I can safely safe assume item number #1 got negative feedback?

This horrible, horrible device just about looks like the most uncomfortable and awkward thing that has ever been invented. The auction claims that "This is a new, flat design that is even more comfortable and even less noticeable than the previous popular models, "but the huge plastic dongs staring back at us seem to differ in their opinions. Wearing one of these would be the equivalent of getting that half-chub in english class, then having to go up to the board and diagram sentences, but even better because it is ALWAYS THERE.
The real climax of this auction comes when you see:

"Bonus! Free pair of Italian-designed sunglasses! See picture for listing and colors. Specify choice of color when submitting payment!" We're assuming you need these because you want everyone to think you look cool when they see you walking down the street with your plastic-cock outline bulging out of your jeans.

Remember that crappy little toy with easy-to-swallow parts that you used to get bored of at your grandparent's house? How would you like to spend 15 grand on a huge one of those that some creepy guy spent way too much time on?
We thought so, just fax the deed to your house over to us, and we'll take care of the rest. Possibly the most depressing part of this auction is not the level of detail that the "artist" had to go into, but rather the handmade, hand-painted frame and exquisite velvet backing that really accent the piece. Thankfully, for the sake of this man's sanity, he will be featured in next year's Ripley's Believe It or Not!, thus assuring him a steady place in the pantheon alongside the Lizardman and that dude who got a railroad spike blown through his head.

When we first came across this auction, we were shocked to see what we thought was a severed baby head in the preview window. It turns out, however, that it was simply a terrifying severed E.T. head.

Of all the horrible merchandise spawned from the '80s film (and there was a lot), this has to be the most terrifying. No doubt the seller is hoping that getting rid of the thing will banish it from their nightmares as well. We doubt it.
Steven Spielberg spent millions of dollars trying to make that crappy puppet look adorable, next to Drew Barrymore no less, and this toy company instead decided to freehand a carving of an achondroplastic dwarf with a lazy eye, then call it a day. Probably the scariest part of this toy is that when you turn it on, the decapitated skull's eyes start glowing red, just in case you didn't know that the object was pure evil.

This is just about the shittiest shot glass ever seen. If you were at some bar and told the bartender "Oh no, I'd like my tequila in THIS shot glass," we're pretty sure you'd wake up the next morning in the hospital with one hell of a barstool lodged up your ass. The only viable use we can see for this shot glass is to use it to get drunk enough to forget what Nickelback is.

What goes better together than nipples and chocolate? Nipples and a knife! Yes this nipple spread comes with a KNIFE included for spreading chocolate over a nipple.

Now, we're not ones to pry, but should you really be buying a product that has the warning "Never over-sharpen blade, especially if used by those who are prone to: sneezing attacks, nervous ticks, slashing fantasies, or DEAD DRUNK!"
Oh, and if you decide to warm the blade in the microwave before you use it, they advise using the "scream test" to check if it's the appropriate temperature. This is another one of those sad situations where the only people who need the warning--psychopaths and cannibals--are also the ones least likely to follow it.

Selling art on the internets?! What an amazing idea! How about political art? Even better! How about a crappy Photoshop manipulation of Barack Obama with some shitty clip art orbiting his head?

WHY CAN'T WE OWN THIS!?!?!!? Oh wait, that's right, because this douche wants to charge you $1,500 for the five minutes he spent on his computer. The cost for his supplies and time must have been through the roof, because we can only imagine that the $950 starting bid he began this auction with made his profit margins razor thin.
Yes, we realize art is more than the sum of its materials. But, not in this case. Either the items are so symbolic as to be indecipherable (though we're pretty sure we know what the Coke symbolizes) or else it's simply a depiction of an Obama who has collapsed on the floor in mid-snack, his skin turning blue from oxygen deprivation, his soft drink and banana having landed near his head. He was also just about to mail something.
To add insult to injury, as the man lay gasping on the floor, a snail has stolen his watch.

Did you know that most animals other than man have an actual bone in the penis called baculum? Well eBay seller "baculumdude" sure does, and he is very willing to tell you about them. He also has his very own store on eBay called, oh you guessed it, Baculum world.

Scared yet? Well, if not, you may be interested in these penis bones (also known as mountainman toothpicks according to "dude"), as they can be used as a conversation piece or... well we guess there's no other use for these, unless you consider the best anniversary present ever an actual use.

This is an auction for some girl's old used breast implants. You see, Janine apparently wants to upgrade her boobs from what she has now to... convex, we guess. This is probably one of the grossest auctions on eBay, considering this object was (for more than several days) inside of the seller's body. While Janine does mention that she has a calendar out for 2008, she refuses to show her face in the auction--go figure. Well, at least whoever buys these can rest easy knowing that there is little else they can do in their lives that will be creepier than this.

Now upon first inspection of the photo for this auction, it appeared to us that "robsue" was trying to start a bidding war for Jesus (with a Buy It Now price of $2). In reality, what rob or sue seems to be selling is a playing card with the Shroud of Turin on it. While we can imagine nothing more exhilarating than getting onto the playground and trying to trade our Jesus playing card for your best friend's Mark McGuire rookie card, the seller only ups the ante once you read the description.

That's right, it's a genuine HOLOGRAM Jesus collectible card. Now we're not one to call something sacrilegious, but putting the King of Kings on par with the pack of X-men hologram cards you got in a box of Cap'n Crunch may be a little much.

Mmmm, nothing gets us going more than 40-year-old used pornography!
Fortunately these are all in good condition and still have the centerfold intact (the seller seems to have done some extensive research into this).

Have you ever thought to yourself, "Hey, I would really like to own the largest nut in the world, but I'm only a millionaire!" Well, you're finally in luck. According to this poorly worded auction, the Seanut is the largest nut in the world "that been register in Guinness Records." Interestingly, in his effort to sell the item, the seller has completely forgotten to note how much the nut looks like genitalia.

Our big problem is that for the $367,000 asking price, it's not at all clear how big this nut is. He should have put something next to it for scale. Is it the size of an ash tray? A bowling ball? A car? Can kids climb on it? Can we put it in the yard and sell tickets? Can we hollow it out and live inside it? And call it Fort Vulva?

OK, now who in their life hasn't either wanted real x-ray glasses or the ability to become invisible? Well billwwilliams is here to finally answer your prayers.

Now, if we are to believe this auction (and of course we want to), then the secret to invisibility has been kept secret for thousands of years and is one of the "best-kept secrets of the ages." But the subtitles at the beginning CLEARLY state that this isn't a magic trick or a ninja technique.
What gives!? Who wants some crappy invisibility that ninjas don't even use? The auction goes on to screw itself over by CLEARLY stating at the bottom and in its description that it is to be used for "MORAL PURPOSES ONLY." What kind of crap is that? If you're doing something moral, you sure as hell don't need to be invisible. That's the stuff you want people to see.

The last nail in the coffin to this potentially kickass auction is the fact that the secret can be "digitally delivered" to you. Fuck that, if the secret of invisibility is "digital" we're getting it off fucking BitTorrent. Then we're hiring ourselves out as an invisible assassin, charging millions to the highest bidder, changing the course of nations with a stroke of our invisible blade. Or maybe just use it to sneak into girls' locker rooms.


Read more: http://www.cracked.com/article_15836_the-12-most-awesomely-ridiculous-ebay-auctions.html#ixzz2IPEtlc4H
Posted by Unknown at 23:58 No comments: